Javascript not enabled: some features will not work.
MOA 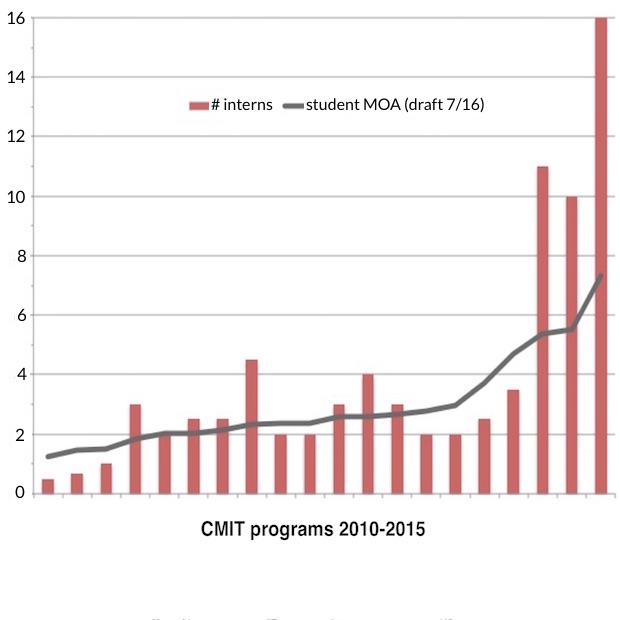 The student MOA measures the factors that affect the "availability" of students to redirect their careers and join a Chi Alpha CMIT program after graduation.

Historically, Chi Alpha ministries have produced more interns per capita at colleges/universities with less rigorous academic cultures and a high level of residential housing. The MOA formula uses data from existing CMIT programs and their campuses (2010–2015). It demonstrates a strong relationship between the campus environment and overall numbers in an internship.

The MOA is NOT a recipe for healthy Chi Alpha — it is only a number. Healthy ministry precedes any fruitful internship. Moreover, great ministry can be practiced on any campus regardless of MOA.

MOA 1–2    This type of campus has not produced many interns historically. These are campuses with a very large population (30,000+), demanding technical programs, or a high number of commuters.

MOA 2–5    CMIT programs on these campuses typically produce multiple interns a year. Many campuses may be a Key campus. It also seems possible to "beat" the averages by having a strong discipleship culture and a staff team with longevity.

MOA 5++    We believe this indicates a campus capable of producing a very high number of interns per capita. Apart from other factors (including a false MOA), this is clearly a Key campus.

Note: The MOA doesn’t predict whether a campus will have alumni join a CMIT program, but it does indicate on which campuses they have historically done so in greater numbers.

A KEY campus is a gateway for producing and launching Chi Alpha missionaries across the state. Contrary to conventional wisdom, this may not be the most known or prestigious campus within a state; often it is not. Campuses with MOA well above 2 are candidates for a Key campus.

A PRIME campus trains strategic members of the marketplace but is less likely to produce long-term Chi Alpha missionaries. Alumni may have influential careers and should be encouraged "give a year" before entering the marketplace. Campuses with MOA of 1 or low 2 are likely a Prime campus.

An OPEN campus is one which does not fit the above categories. Most likely an Open campus is a 2-year, private, or urban commuter campus with unique dynamics that make the traditional strategy of Chi Alpha more challenging, but nonetheless a good opportunity to disciple students.

Other factors to evaluate: It is possible that a college/university with a high MOA is not truly a Key campus. Therefore it is important to weigh other factors that might limit student availability but which are not part of the current MOA, including:

In terms of actually launching a Chi Alpha ministry on the campus, it is also important to consider anything which affects missionary health or group growth, including:

Please download the summary document below for evaluating the viability of campuses using the designations of Key/Prime/Open, and for developing a strategic pioneering plan in your district. (Click here for additional surveys used in pioneering boot camp.)

There are many things to say about the MOA formula... about where it works and does not work. Suffice it to say that the MOA scores overly high for campuses that are extremely small (less than 3,000). It also does not indicate anything with confidence about how Chi Alpha can produce interns on 2-year campuses, at private schools, etc. Please be mindful of these limitations; don't be too excited about a really high score.
Version 2 of the MOA will eventually include relevant information and modifications recommended by the XA Guiding Coalition and by yourselves.
Questions welcome. Please contact Dan Guenther at danaOwa,usa.nwxa.org.

Some people have asked whether the MOA is the number of interns predicted on a campus. That is not the case. The MOA is just a number; it is a multiplication of many percentages and has no unit itself. In fact, the MOA number has to be normalized in order to fit on the graph. I have chosen to normalize the MOA at 2.00 when it matches the first internship (reading from left to right) that has multiple interns.
Because of this, there is no way to know whether the highest MOA campus (far right on the chart) is predicted to produce only 8 interns a year (as the MOA shows), rather than 16+ (as its actual intern # shows). It is only important to compare the MOAs against each other, especially at ends of the scale. Thus the highest MOA campuses might be expected to produce more interns than other campuses, simply because the student 'availability' is higher. Again, all other things being equal apart from would happen by a sovereign move of God.